Invasive species and their link to wildfires: a conversation with Dr Rafael García

“If there is no human activity, there is no biological invasion. Everything combines in favour of the establishment and continuity of these species in suitable climate areas, high population density and abundant productive, farming and forestry activity” 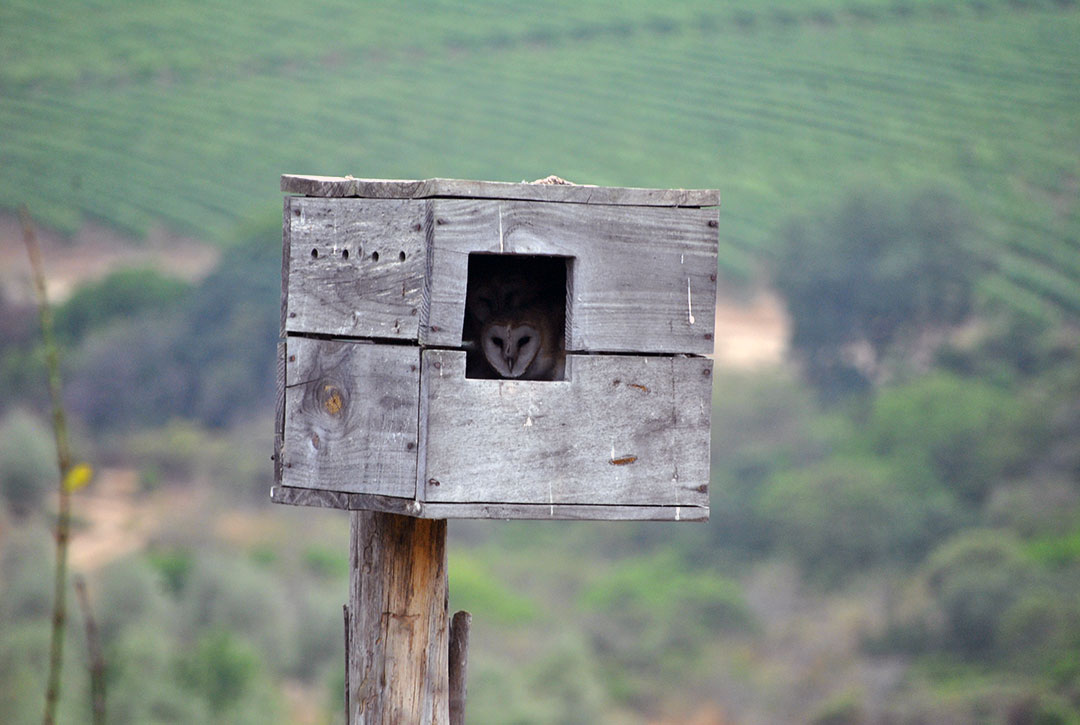 Rafael García is an Academic Collaborator at the Faculty of Forestry Sciences, Universidad de Concepción, and Applied Science Researcher at the Biological Invasion Laboratory (LIB) and research associate of the Wine, Climate Change and Biodiversity Programme (VCCB). He studies the ecology of invasive plant populations, particularly their impact on and interaction with other disturbances, such as wildfires. He also studies the applicability of management and control strategies for invasive exotic species.
Rafael García explains that in Chile there are three types of non-native species. Exotic species, i.e., any non-native species introduced into the country. Naturalised or alien species able to live autonomously, spreading away from crops and gardens, without depending on humans. And invasive species, which are naturalised species that become abundant and generally have an environmental and economic effect. The latter are one of the current factors that affect biodiversity in our country, as well as wildfires. They each cause an impact and they are also able to interact. Furthermore, we should first add climate change; it modifies the scenario from normal to extreme conditions, for example droughts or heavy rains. And, second, land use change in areas hit by fires caused by rapid land degradation. As a result, forests do not naturally recover and invasive species proliferate. García asserts that, although a plant must have certain characteristics to become invasive, it is also going to depend on how it behaves in a specific ecosystem. “In other words, not because a species has already been invasive in an area, it is going to be invasive everywhere. There are several factors that will determine its success. It is not the same to put an invasive species in the middle of a closed native forest, where there are many species competing with it, then to put the same species in a degraded environment, with recurrent fires, near a road. Here the probability of success is different.” Furthermore, “the more diversity, the more controlled the ecosystem, the likelihood of invasions, pests or hazardous fires will be lower;” and, depending on where the species is found, it will be the tool to use for its control.

How do these species become established in a territory?

The truth is that it varies greatly from species to species, but the highest densities of invasive species, as well as the highest number of fires in this country – is found in the Mediterranean region of Chile, as these species come from similar climates – like Spain, mainly – with relatively frequent fires. This means that these plants are already pre-adapted to fire scenarios, and they have very different adaptations: for example, pine tree cones open up with the heat and seed afterwards. Others, such as the French broom, its seeds tolerate high temperatures, but the plant dies. There are other cases where the plant regrows. And consequently, there are a number of adaptations that have allowed these species to remain and proliferate in this disrupted environment in Central Chile. Another important point explained by García is that without human activity, there is no biological invasion. Therefore, everything combines to favour the establishment and continuity of these species: suitable climate zone, high population density and abundant productive, agricultural and forestry activities. “If we add this new scenario of wildfires – which have always existed, but not with the recurrence and impact of recent years – tend to favour them and they remain in the system,” creating a kind of “virtuous circle or positive invasion feedback, where some – not all – species have some characteristics that make fires more recurrent as well. So fires favour their establishment, and their establishment would tend to increase the spreading or intensity of fires,” becoming repeatedly mentioned concepts in recent times, such as “pyrophytic species” which, he explains, “is a characteristic, not a negative attribute, because any species that adapts to fire is pyrophytic, as many native species are too,” because it depends more on the extent of forest degradation. “If you go to a well-preserved forest and it burns, the impact is going to be low and it is going to recover on its own, but in a completely degraded environment, which was already under the pressure of livestock, past fires, mixed with already invaded agricultural soil, after it burns, the species are already on a low, then they just need to be topped off.” García adds that “fires are moving south, looking for slightly less altered ecosystems and the response of native species has been quite good,” specifying that “the problem is that many of the exotic species are as adapted or even more adapted. Then you go to a site that was burnt, for example, in 2017, near Constitución, where I have visited several native forests, and the species recovered almost completely, but this also included a lot of exotic species, going from having many native plants and a few exotic species to having almost the same amount of native and exotic species.” If this continues over time and another fire occurs, “probably the proportion will be to have increasingly more exotic and less native plants, starting a slow substitution of land use and of the dominating species, due to the interaction of anthropic factors, such as wildfires.” Another difficulty is that “it is not clear what they adapt to. Fires are not as frequent as in other ecosystems where you can claim: “yes, it is to fire.” For example, it could be adaptations to frost or browsing herbivores from before. “But whatever the evolutionary reason by which species are able to regrow, the point is that now, after the action of fire, they continue to regrow.” Native and exotic species also have different strategies to do this. “While, most native species regrow, many of the exotic species germinate after a fire.” In other words, if I cut a native tree, the tree will regrow. From that same stump that was left, new stems and shoots begin to emerge, but it is still just one. This is regrowth. “Exotic species germinate from seeds, so I can have 100 seeds per square metre, and 100 new plants grow, even if many of them die. In other words, the comparison is a tree that regrew versus 20 French brooms that managed to take root. In addition, because it is a seed it is sexual reproduction, thus there is variability. All individual plants that germinate are different. But if you regrow, it’s basically vegetative, clonal reproduction, there is no genetic variability, so the likelihood that the population will tend to decline is going to be higher, because I am just maintaining the system.”

Given this context of climate change, where drought is spreading and water availability is declining. Should authorities put more emphasis on supervision in terms of controlling invasive species or focus on planting native species?

Both. They should not be mutually exclusive. We must try to do, as far as possible, both and always prioritising the areas that – for some reason – are more urgent to control or restore. He also specifies that given that only two of the three factors, needed for a fire to occur, can be managed – vegetation or fuel and ignition, or who causes a fire and its origin – “the first thing to do is to move forests away from cities, and this sometimes involves cutting not only plantations, but also managing, to a certain extent, native forests or these exotic and native combinations, whether we like it or not, a native forest close to populations means an increased risk for these people to be affected by a fire.” He then proposes to “try to favour more natural ecosystems, with higher tree density, preferably native and reduced presence of exotic species,” although he does acknowledge that it is complex, even more in a scenario like Chile, where there is a shortage of resources and even more so for this type of situations, because it involves a “more complex territorial management, which would have long-term results. So, the call is to try to avoid making fires, because it should be easier to change people’s behaviour,” such as banning agricultural or waste burning, although he does admit that this is also complex.

Who in your opinion should be responsible for eliminating invasive species?

This topic is currently in no man’s land. SAG (the Agricultural and Livestock Service) is quite effective, but by law it has to focus on exotic species that deteriorate crops, in terms of agriculture or livestock. So, if I have a species that only creates an environmental impact, SAG does not have the authority to act. It can only do so within protected areas, so the institution that should oversee this is the Biodiversity and Protected Areas Service (SBAP), Ministry of the Environment. He asserts that there are species that should be banned or eradicated now, as they have the analyses that justify this action, such as minks, beavers and lodgepole pines. In the invasive species group, we find the silver wattle, French broom, which are species widely used to control erosion, but which should have native substitutes. There are also more complex ones, such as blackberry or rosehip, which are also invasive exotic species, deeply rooted in rural culture, which although on the roadside cause little impact, in national parks and in the native world they are a serious threat. But it is a complex issue, as there is the dichotomy “between important economic use and it is deeply-rooted in our culture. It is impossible to take these species away from people, so even if there is a powerful SBAP, little or nothing can be done, except its distribution within protected areas and other natural areas that are worth preserving. The same goes for salmon and pine trees, because as they have an economic use, it becomes much more difficult to control.” He points out that the problem is not the actual plantations, although the ideal would be to try to discourage these crops, but these species invade when they leave their plantations and become naturalised. “That’s what we should avoid, as well as the escape of salmon from their cages and cows in woodlands.”

Is there a case you could mention – country or region – that has achieved species management, by implementing public policies to control them, resulting in the protection of native forests?

There are nuances. For example, Australia and New Zealand have been tremendously successful in controlling exotic species, but because they are islands and had significant invasion problems (…), but they are currently an example in terms of entry and having the world’s strictest regulations, but I don’t know if they are seen as positive. In Australia there are fences that cross the whole country, a fence from coast to coast, to prevent cats from moving around the island and, as they crossed the fences, they were killed. And New Zealand has quite a successful pine control by aerially applying herbicides, by airplanes and helicopters, like in the Vietnam War, to kill pines; it has been a tremendously effective system.
Back to News